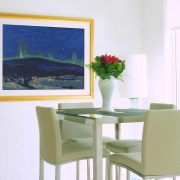 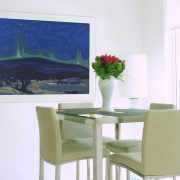 The original painting of “Northern Lights” (1916) is in the permanent collection of the National Gallery of Canada.  Like “Northern River” of 1915, this work exemplifies Tom Thomson’s honest attempt to capture the character of the northern landscape in a poetic manner informed by direct experience and careful examination. The Sampson-Matthews silkscreen of the same name, from 1947-1953, was based on this important painting and was among the most popular images produced by the firm.  A.J. Casson, who supervised nearly all of the works in the Sampson-Matthews silkscreen art program, worked directly on this silkscreen to capture the colours and atmosphere of the original painting as accurately as possible.